What exactly is degenerative disc disease?

Between each bony vertebrae of the spinal column, there is a soft tissue shock absorber known as the intervertebral disc. Every time an individual walks, jumps or twists, the disc is able to relieve those stresses in an extremely effective manner. Normally, the disc is comprised of 80% water along with collagen and proteins making out the other 20%.

Unfortunately, father time typically catches up to humans with aging. The 80% water starts to dissipate, and the disks slowly start to degenerate. They are no longer able to effectively handle all of the stresses being seen, which then shifts stress to spinal joints and causes arthritis.

As a disc degenerates, tears can occur in the outer part. This is where individuals have nerve endings and pain can arise. Degeneration of the inner part of the disc does not cause pain as there are no nerve endings in that area.

How common is degenerative disc disease? 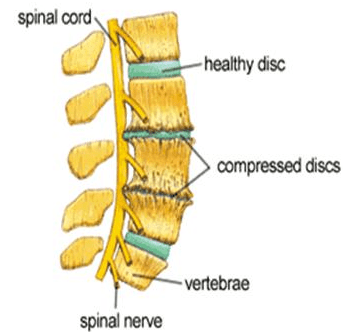 The intervertebral disc has been shown to be a cause of low back pain in approximately 20% of patients. So it is fairly common, and it occurs mostly in middle-aged individuals Degenerative Disc Diseasebetween 30 to 60 years of age. Usually over the age of 60, the causes for back pain shift more towards facet joint arthritis and spinal stenosis as the disc becomes significantly dehydrated and stiff.

The vast majority of those Individuals had no back pain whatsoever. This percentage rises significantly with each decade age group.

When looking at risk factors for degenerative disc disease, there is a genetic component, and if an individual has this disease in one level in the lower lumbar region, it does not mean it will develop in other levels. There are certain occupations which show a predilection for onset of degenerative disease, including truck drivers, construction workers to name a couple.

What symptoms are present?

Usually, those with symptomatic degenerative disc disease complain of back pain that may radiate into either the left or right side more than the other. Often, the pain radiates down into the buttock area and possibly around to the hip region.

The pain may occur every day, or it may wax and wane frequently. It has been shown that the most disc pressure occurs when an individual is sitting. Therefore, it may be necessary for those with symptomatic disc disease to stand up frequently to relieve pain.

How is degenerative disc disease diagnosed?

Typically, patients will complain of significant chronic back pain and be in a typical age group for the problem. X-rays may show loss of disk height on the films along with bone

changes due to concomitant arthritis. If the disk height loss is severe enough, nerve roots can be indirectly pinched as they try to get out from the spine, and patients may have symptoms in their lower extremities as well such as sciatica.

An MRI may show a dark disk, which is indicative of a loss of water. For this reason, DDD on MRI is often called black disc disease.

What treatments are available for DDD?

Treatments for DVD are not extensive, but often times they work well enough to achieve successful outcome. Initial treatment should consist of NSAID’s and Tylenol. These should be taken according to the manufacturer’s recommended dosing.

For short-term exacerbations, treatment should consist of opioid medications but not for long-term treatment. With long term opioid treatment for disc related pain, the risks start to outweigh the benefits.

Injections into the disc have been shown to provide benefit with steroid medicine. A study in Spine 2004 showed significant benefit with disc injections over a period of months. There are current studies ongoing looking at stem cell therapy or platelet rich plasma injections into the disc. It’s an exciting treatment, as the ability for the disc to repair itself is abysmal. Possibly with the right biologic substance it can regenerate somewhat.

Physical therapy, chiropractic treatment and acupuncture treatment have been shown to provide relief. Spinal decompression therapy is a revolutionary treatment that has been shown to work well over 85% of the time for DDD related pain. (Orthopedic Technology Review, Gionis et al 2003).

One of the best treatments going for DDD is aerobic exercise, such as swimming and cycling. Running is a bit high impact and may exacerbate the problem.