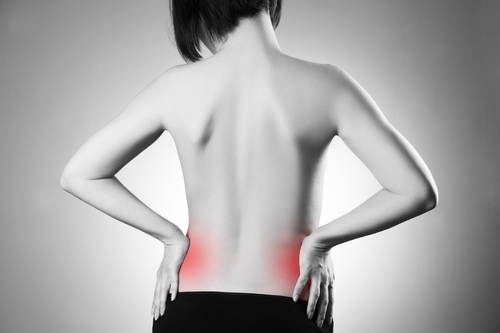 The pain is felt in the lower back, buttock, and/or various parts of the leg and foot. In addition to pain, which is sometimes severe, there may be numbness, muscular weakness, and difficulty in moving or controlling the leg.

Typically, the symptoms are only felt on one side of the body.

Although sciatica is a relatively common form of low back pain and leg pain, the true meaning of the term is often misunderstood. Sciatica is a set of symptoms rather than a diagnosis for what is irritating the root of the nerve, causing the pain.

This point is important, because treatment for sciatica or sciatic symptoms will often be different, depending upon the underlying cause of the symptoms.

“Pseudo-sciatica”, which causes symptoms similar to spinal nerve root compression, is caused by the compression of peripheral sections of the nerve, usually from soft tissue tension in the piriformis or related muscles (see piriformis syndrome and see below).

One cause of sciatica is a spinal disc herniation, pressing on one of the sciatic nerve roots. The spinal discs are composed of a tough spongiform ring of cartilage (annulus fibrosus) with a more malleable center (nucleus pulposis).

The discs separate the vertebrae, thereby allowing room for the nerve roots to properly exit through the spaces between the L4, L5, and sacral vertebrae. The discs cushion the spine from compressive forces, but are weak to pressure applied during rotational movements. That is why a person who bends to one side, at a bad angle, to pick something up, may more likely herniate a spinal disc than a person falling from a ladder and landing on his or her back. Herniation of a disc occurs when the liquid center of the disc bulges outwards, tearing the external ring of fibers, and compresses a nerve root against the lamina or pedicle of a vertebra, thus causing sciatica.

Other compressive spinal causes include spinal stenosis, a condition wherein the spinal canal (the spaces through which the spinal cord runs) narrows and compresses the spinal cord. This narrowing can be caused by bone spurs, vertebral dislocation, inflammation, or herniated disc which decreases available space for the spinal cord, thus pinching nerves in the spinal cord that travel to the sciatic nerve and irritating them with friction.

The risk of self-inflicted sciatica has increased in recent years with the fashion trend of lower-hanging trousers as well as lower-positioning of the pockets. For instance, sitting on a wallet for prolonged hours every day can cause self-inflicted sciatica. Symptoms of numbness and/or pain behind the knee cap are associated with this form of sciatica.

Another cause of sciatic symptoms is sacroiliac joint dysfunction. Unhealthy postural habits, such as excessive time sitting in chairs, and sleeping in the fetal position, along with insufficient stretching and exercise of the relevant myofascial areas, can lead to both the vertebral and soft tissue problems associated with sciatica.

Another source of sciatic symptoms is active trigger points of the lower back and the gluteus muscles. In this case, the referred pain is not consequent to compression of the sciatic nerve, though the pain distribution down the buttocks and leg is similar. Trigger points occur when muscles become ischemic (low blood flow) due to injury or chronic muscular contraction. The most commonly associated muscles with trigger points triggering sciatic symptoms are: the quadratus lumborum, the gluteus medius, the gluteus minimus, and the deep hip rotators.

Sciatica may also be experienced in late pregnancy, primarily resulting from the uterus pressing on the sciatic nerve, and, secondarily, from the muscular tension and / or vertebral compression consequent to carrying the extra weight of the fetus, and the postural changes inherent to pregnancy.

Because of the many conditions which can compress nerve roots and cause sciatica, treatment and symptoms often differ from patient to patient. Diagnostic tests can come in the form of a series of exams a physician will perform. Patients will be asked to adopt numerous positions and actions such as squatting, walking on toes, bending forward and backward, rotating the spine, sitting, lying on back, and raising one leg at a time. Increased pain will occur during some of these activities.

Treatment of the underlying cause of the compression is often the most effective course. When the cause is due to a prolapsed or lumbar disc herniation, research has shown that, with supportive treatment to help relieve pain, 90% of disc prolapse will recover with no specific intervention. Genetics appear to influence the risk of developing disc herniation.

In the past, treatment has involved pain medication, muscle relaxers, physical therapy, and even surgery, which is only about 60% successful. The chiropractic approach is to use carefully directed and controlled pressure to remove the interference from spinal structures. These chiropractic “adjustments” are very effective in reducing nerve irritation and its associated pain.